I’ve been doing the Couch-to-5K plan for beginning runners (I put up a review at Hobo Mama Reviews if you’re not familiar and want this freebie’s details), and I was so glad to realize there was a free Android app for it for my smart phone. See, the plan calls for a series of jogging periods interspersed with walks to cool off, and before I had the app, I had to purloin my three-year-old’s Gap watch (he made me buy it) that has a stopwatch feature. Then I would obsessively check my timing as I ran, wondering, “Can I stop yet? Can I? Only halfway! No. I thought I was much further along. Drat.” And during the cool-off walks, I’d be thinking, “Surely I can walk for longer, yes? Oh, shoot, I’m already over my time!” I also had to keep a running tally of how many iterations I’d done of the jog-walk cycles, and sometimes I would feel discouraged to think I still had, say, three to go while I was in the middle of a particularly painful moment.

It made the running a little more stressful, because I was so focused on how far I’d been and how far I’d still to go.

Then came the app. I push the start button and pop the phone in my zipper pocket, and I just wait for the little “ping” to tell me to switch paces. I actually feel like one of Pavlov’s dogs, so obedient am I to the chime.

In between each signal, I just … run. I don’t think about how long it’s been or how much longer I have. I just go with the moment, and feel my feet touching down, and listen to the waves crashing alongside me, and enjoy catching a sunset, and daydream about nothing and everything.

Today I was thinking how this relates to birth. Bear with me here.

My labor with Mikko lasted 42 hours, all told. For much of it, Sam and I just were. I focused inward and used my Hypnobabies relaxation to keep myself calm. Yes, there were times we distracted ourselves by looking up what famous people were born on our child’s birthday — which changed two times as he refused to come out! — but mostly we just labored and napped and dealt with the waves of intensity and the troughs of relief in turn.

What broke our concentration?

All demands to quantify my “progress.”

This came mainly in two forms: vaginal exams and family members emailing and calling to ask how things were going.

I wrote before about how I didn’t appreciate the vaginal examinations I had during labor, because each exam told me the same thing, throughout the first 40 hours: I was at 5 cm. I was not, by that measure, progressing at all. It made each contraction I’d experienced seem pointless, like slogging along a race path with an ever-receding finish line. At each exam, each break in concentration, it would seem there should be some news of how far I’d come, and how less far I had still to go — but, no, the result was always the same: You’re halfway there. Always halfway there.

I didn’t get to 10 cm until just before my hour and a half of pushing, and that only with some help from the nurse-midwife. By that point, I’d had my waters broken and transferred to the hospital despite my planned home birth — and that stubborn number refusing to budge was a big reason for the transfer, even though, in retrospect, it was a completely meaningless one. Things were progressing, just behind the scenes, as it were. Only in bad dreams can you run and run and not get any closer to your goal, after all, and this was real life.

As for family members, I hadn’t wanted to tell anyone we were going into labor, due to my, as it turns out, appropriate fears of how that might affect me. Sam had already promised to tell his mother, though, so I felt it only fair to let my side of the family know as well. Which of course meant everyone knew. Sam and I were not in the mood to answer the phone, and email was equally out of sight and out of mind during these hours of focus. Whenever we “came to” and checked either, we found several frantic messages from family members, demanding a report and a response.

While I completely understand our family’s position, of being concerned at the length of the labor and not being able to trust in “no news is good news,” it was so distracting and discouraging for me. Every time we had to describe how long we had come and speculate on how far we had yet to go, it served only to remind us how very little we knew about the future and how very long the labor so far had been. It was like having someone yell at you at a water station during a rest in a race, “Does it hurt a lot? Are your legs burning? Aren’t you getting tired? Do you even know how far you have yet to go? It looks like it’s still really far!” It wasn’t helpful.

I’m pregnant again now, which is a good time to renew my expectations and hopes for the next birth. I hope we can take our experiences in the last birthing forward into this one and be in the moment more, refusing both outside and arbitrary measures of progress and the social necessity to explain and define our journey so far to others. We’ll see what the midwives think of the first, and how well we can hide from our families this time around. I think it’s worth it, though, to have that calm and plodding certainty in my body’s natural progression, in putting one foot in front of the other, breathing in and out, listening to the waves, and daydreaming about the baby on the way.

Statements on this website have not been evaluated by the Food and Drug Administration. Products and/or information are not intended to diagnose, cure, treat, or prevent any disease. Readers are advised to do their own research and make decisions in partnership with their healthcare provider. If you are pregnant, are nursing, have a medical condition, or are taking any medication, please consult your physician. Nothing you read here should be relied upon to determine dietary changes, a medical diagnosis, or courses of treatment. 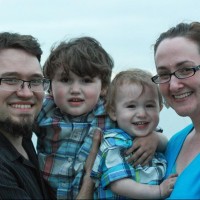 About The Author: Lauren Wayne

Lauren Wayne is a co-founder of Natural Parents Network. She works and writes at home with her husband, Crackerdog Sam, and their sons, Mikko and Alrik. Lauren blogs about natural and attachment parenting at Hobo Mama, offers reviews and giveaways of natural parenting products at Hobo Mama Reviews, and gives a behind-the scenes look at blogging and writing at LaurenWayne.com. Lauren co-hosts the monthly Carnival of Natural Parenting and is the author of Poetry of a Hobo Mama: The First Three Years, The Natural Parent's Guide to Babywearing, and What Will We Learn Today? You can find Lauren on Twitter, Facebook, her Google+ profile, her Google+ page, and Pinterest.

Ten things to do during bad weather

5 Responses to Birthing Without a Stopwatch