Annabelle at 8 months on her Little Potty

Elimination Communication is practiced a little bit differently by every family.  There is no right or wrong way, and it’s not all or nothing. It can be started at any time from birth to potty independence, and can be used part time or full-time. EC’ing families may go sans diaper all the time or some of the time, and may use cloth diapers or training pants as back up. There’s no reason why disposable diapers can’t be used, but they’re generally discouraged since they hinder babies’ awareness of being wet. See Part 1 for an explanation of what EC is and the thinking behind the practice. In this article, we’ll talk more about the “how” than the “why.”

When an EC’ing caregiver correctly anticipates an infant’s need to eliminate and helps them do so in the infant’s designated place, she usually refers to it as having “caught” a pee (or a poop). When she doesn’t catch on to a need and the infant eliminates in his diaper, trainer, clothing, or anywhere not intended for elimination, the caregiver may say that she had a “miss.” The infant’s characteristic signs that he needs to ‘go’ are referred to as his “cues.” Additionally, many caregivers give cues to the child to let them know that they’re ready for the infant to eliminate, should they need to do so. More on cues later.

Some families, like ours, begin EC at birth. Others opt to wait until the infant can sit on their own, making it possible to sit on the potty with minimal assistance. Still others start at some other time, either out of necessity (as in response to a need like severe rashes), or because they just decide they want to. There is no wrong time to start! 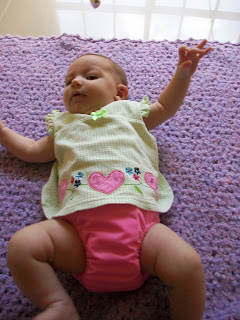 Annabelle in her EcaPants at 3 months

There isn’t really any specialized equipment needed for EC practice, but you may want to think  about a few things before you start, such as whether you’d like to use as a potty and whether you want any kind of “back-up” or plan to go diaper free altogether.

You may also want to choose a “cue.” At home, many families, including ours, use the Baby Bjorn Little Potty, but you can use something you happen to have around the house as well. The benefit of the Little Potty is that it allows for independence as infants grow. There are many great options for back-up from regular cloth diapers to split pants, to specialized EC trainers. Our favorite are EcaPants, but since they’re not easy on the budget, we use a prefold belt at home much of the time. Every family and every baby is different, so it’s wise to try a few different things before investing in a whole stash of diapers or trainers.

As you watch your infant and get to know her habits, you’ll start to see patterns – cues that she needs to “go.” For some, it’s timing. One baby may unlatch mid-nursing session, take a break for a wee, and then go back to it. Another may always need to go ten minutes or so after eating. For others, it’s certain behaviors – one babe may have a characteristic pre-poo wiggle, or another an unmistakable grimace. Any of these things will “cue” you to respond by taking your child to a comfortable and hygienic place to eliminate, whether that’s a chamber pot beside the sofa where you’re nursing, a little potty, or the bathroom sink.

Parents also use their own cue sounds to help facilitate communication. When first starting out their EC journey, caregivers may make a sound, such as “sssss” or any bathroom word, like “wee.” When they notice their infant going, whether it’s a catch or a miss, they make the cue sound to help draw baby’s attention to the fact that they’re going. One goal of EC is to allow children to grow up viewing elimination as the most normal, natural thing in the world – free from bathroom shame and embarrassment. For this reason, cues are great, because they acknowledge what is going on and help the infant to recognize it, without any fanfare over a catch or shame over a miss. Saying “sss” is like saying, “Oh, I see, you’re going pee.” Since the infant learns to associate the cue word or sound with elimination, it is also sometimes used when offering a potty-tunity, to let the infant know they’re in a place where they can go. Not everyone uses specific cue, however. It’s up to you! Using the ASL sign for bathroom or another sign can be helpful, since infants can use it to communicate with you as they get older.

The most surprising thing to me in my own EC journey was that my daughter was perfectly capable of staying dry all night long. I didn’t intend to practice EC at night, since even toddlers and preschoolers sometimes wet the bed, right?  I used a cloth diaper with a waterproof cover at night until my daughter was about a month old and I started noticing that she would wake up dry. I decided to give it a try and, as it turns out – night time (and nap time) is even easier than daytime!  Once an infant gets used to being taken to the bathroom upon waking, it seems that they’re able to stay dry while sleeping.

To make nighttime EC easier, a waterproof pad or two for the infant to sleep on is a great investment. This way if there is a miss, you don’t have to bother with changing the sheets in the middle of the night. Many families use a lanolized wool “piddle pad,” but any waterproof pad works fine – just make sure it’s safe for sleeping and doesn’t present a suffocation hazard. Having a potty of some kind right near the family bed or baby’s crib will also help make nighttime EC much easier and minimize disruption of sleep. This way, the occasional nighttime wee doesn’t have to mean turning lights on or tromping across the house.

The "improvipotty" for outings in the car

ECing while out and about was, for us, the biggest challenge. It took a long time before I tried it at all. It was so much harder for me to recognize my daughter’s cues, and there wasn’t always a good place to go when I did. I have heard many great suggestions from other moms, and I have developed a system of my own.

I have heard from moms who save disposable coffee cups and hold them in place for their infant to wee before taking them out of the car seat. Others hold their baby over the ground just outside the car, with the door offering a bit of privacy. Out and about, some just find a bush. It’s all about what you’re comfortable with. I’m perhaps overly concerned with my daughter’s privacy and a bit timid myself, so I avoid EC’ing my daughter where strangers may be looking on. Personally, I keep a large plastic bowl with a lid in the car and use prefolds as liners for it. I place the bowl in my lap and hold my daughter over it. If she goes, I put the soiled prefold in a wetbag and replace it with a fresh one. This way I don’t have urine sloshing around in the backseat, but I’m still able to offer a semi-private potty-tunity when we’re out on errands. When public restrooms are available, they work just as well as the bathroom at home!

Early in my own EC journey, there were many misses. I also had trails of poo on the way to the bathroom. All of this had me thinking that, contrary to what I had read, EC may be even less hygienic than traditional diapering. I was wrong. Those who are particularly intuitive may have an easier time, but if you are having misses or trails of wee, take heart. It gets better. Not only did I learn to understand my daughter’s needs better, but she also learned that I would take her to the bathroom, and she began waiting until she was in position, on the potty, before she started to go. It may come easier for some than others, but EC is possible! Take it a day at a time, and do as much as you’re comfortable with. If you only go diaper free for an hour or two at a time to start with, that’s fine. The key is to be relaxed and in tune with your child. If it stresses you out – put a diaper on and try again later!

Melissa has perfected the art of working from home without being gainfully employed. She is mom to two vibrant, curious children, with whom she and her husband live and adventure in the Washington, DC area. When she’s not baking, pushing swings, and attempting yet again to summit laundry mountain, she’s working on the Montessori community program for which she acts as teacher, to her own daughter and a handful of other children. She can also often be found writing about something Montessori-related, or just motherhood in general, on her blog, Vibrant Wanderings.

Family Resolution for 2011 – Unplugged & Tuned In