I have in the past described briefly the challenges I met when I was breastfeeding my first son. He had difficulty getting and maintaining a latch, his weight dropped greatly in his early days, and he was misdiagnosed failure to thrive. I was instructed that I needed to supplement with formula immediately and handed a free box to get started.

Of course if I wanted, I could express my milk beforehand, use this “contraption” that was a tube and syringe to supplement at the breast, and hold and position my newborn all with only two hands. Even with assistance, this was hard to do. I eventually gave up on breastfeeding naturally and turned to exclusive pumping. Every day for two months I struggled to make enough milk, with my own self-imposed guilt over using formula when I couldn’t meet his needs.

My son’s difficulty with breastfeeding was due to an undiagnosed tongue-tie and fortunately once he had gained some weight and his mouth grew we were able to return to natural breastfeeding. Not that returning to breastfeeding was in any way easy. I had the help of an excellent lactation consultant and the support of a very dear friend. It was only after breastfeeding was reestablished that I was able to look back and see the times and places that I could have been supported better: in the hospital when they gave me a nipple shield, at my pediatrician’s office when I was handed a box of formula, from myself by not knowing that I could seek out other women who breastfed or knowing my resources before hand. I made a promise to myself that if I got the opportunity to breastfeed another baby, I would learn from this experience and help myself.

So when my second son was born I made sure I followed every suggested practice for establishing a successful breastfeeding relationship. I changed the method and setting of my birth to a water birth in a birthing center under a midwifery care model. I hired a doula and told her that our priority following the birth was to breastfeed. I made sure that right after birth I practiced skin to skin and encouraged the breast crawl and breastfeeding. In the first hours, though, I recognized the signs of tongue tie with my son. I made sure I spoke up about it and asked the nurse, who was also in agreement. She showed me how to stimulate his suck reflex before nursing. I remained calm and continued to stimulate my son during feedings by tickling his cheek. At home I fed on demand and spent as much time as I could skin to skin with him and left him unswaddled.

Our first visit with the same pediatrician held echos of the first, and they asked for a return weight check in a week. I continued to stimulate during nursing and eliminated distractions and sources of stress. I checked in with my doula for support and reached out to my local La Leche League to find further resources for breastfeeding babies with tongue tie. I was able to find a pediatric breastfeeding specialist and made an appointment for the day after my weight check with the pediatrician. I then started to keep a breastfeeding and elimination log, in preparation to discuss any concerns about weight gain or loss. I also was able to see the lactation consultant at my midwife’s office and learned a new breastfeeding position. I felt like I had every available resource and that according to wet and soiled diapers, my newborn was heading in a good direction.

My husband and I spoke about my fears of formula and pressures to supplement before our return visit to the pediatrician. He calmly reassured me that the first thing they said that we didn’t like, we would leave. At the second visit to the pediatrician, I had informed them we were going to see a pediatric breastfeeding specialist about the tongue tie and that I wanted a referral written just in case the insurance company asked for it. I explained that we were seeing this doctor the next day to confirm the diagnosis and to develop a treatment plan. There was some confusion about what I was asking for, and then they weighed my week-old baby and told me he had not regained birth weight and that they were concerned. I was prepared for this and had already learned that an infant can take up to three weeks to regain birth weight.1

Babywearing while practicing skin to skin.

The nurse was sent in with the “contraption,” and a box of formula was set on the counter. During their attempt to talk me through this one more time, I interrupted and said without hesitation that I was refusing formula, I just needed a written referral to the other doctor’s office and that we were leaving. I consented to come in another week for a weight check and to inform the pediatrician what the plan of action was from the specialist. I made the appointment for the weight check with one of the other pediatricians on staff for the next week but walked out of there knowing I was not going to stay with this practice. I knew that my instincts and research were correct and that I needed to surround myself with a support network that was respectful of that.

We worked with the pediatric breastfeeding specialist for two weeks, and my little guy was able to regain his birth weight and then continue to grow rapidly. We found another pediatrician who has no concerns about his weight and wonders how anyone could have ever thought that he wouldn’t be able to breastfeed. At our two-month appointment with her, he weighed 14 pounds, 1 ounce, and he is steadily gaining and a very happy nurser. I had learned my lessons from the last time and am proud of myself for taking all the actions I could toward breastfeeding success this time around.

You can, too — link up your breastfeeding posts from August 1-7 in the linky below, and enjoy reading, commenting on, and sharing the posts collected here and on Natural Parents Network.

(Visit this post for the code to place on your blog.) 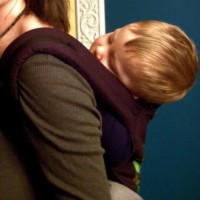 About The Author: Shannon R

What Breastfeeding Taught Me About Success