I’ve been doing Elimination Communication with my son Leon (now 11 months) since he was about 6 weeks old. I’d read about it before he was born but finally decided to give it a real go when he was sat propped against my knee, grimacing his best poo-face, while I rubbed his feet and made soothing noises. I looked at the nappy he was still wearing and thought: Why am I waiting for him to dirty this rather than holding him straight over the toilet? Leon caught on to the whole notion pretty quickly, and since then I’ve changed barely a handful of dirty nappies.

Pee, though, is a different matter, and our hit rate with pee catches (as for many other ECers) has always been variable. Then in December, we were away overnight with friends, and Leon signaled every single time. We went home with only one wet nappy, his overnight one. But then a little while after that, he suddenly started potty-resisting. I’d spot a signal, pop him on the potty, and he would arch backwards complaining vociferously. We had a potty pause.

I thought a bit. I read a bit. I chatted to other ECing mamas. Finally, I concluded that maybe this was a sign that he needed to take control of the situation more. With a little trepidation, the nappies went in the drawer, and Leon was nappy-free in the house. (We have hard floors. This wasn’t too huge of a commitment.)

At first, it seemed we were making progress. I had a new awareness of when he was going and thus of his involuntary signals; he was signaling deliberately at least sometimes. The potty-resistance continued, though. He would vigorously wave his hands, I would put him on the potty, he would climb off … then pee on the floor. I thought a bit more. I read a bit more. I decided that we should keep the faith.

This baby is probably about to pee on the floor. Again.

Leon, for his part, kept right on peeing on the floor. On the other hand, he would also politely clamber off my or his dad’s knee before doing so, he never peed in the sling, we did get the odd pee catch, and we were still 100% on poo catches. It seemed worth continuing. The next development? He worked out how to pee on the floor without getting his leg-warmers damp (You stand up! Genius!), and stopped signaling altogether. I spent a lot of time mopping up puddles. Those hard floors of ours meant it wasn’t too big of a deal, but it was starting to stress me out (never good with any aspect of parenting, certainly not with EC). I was hovering too much. And I was beginning to wonder: Could it be that what he was learning now was … to pee on the floor?

I thought a bit more. Nappy off: no signal, peeing happily on floor. Nappy on: signal, peeing in potty. Not only that, but increasingly, I was hovering over him anxiously awaiting a puddle. Not good news for either of us.

So last week, we went back to nappies. And … our catch rate went back up.

It’s not 100% — it’s never going to be until he’s ready to manage the whole thing himself — but I’m no longer stressed and hovering, and we’re communicating far better. We only really have potty resistance now if I interrupt his busy baby activity just because I think he needs to go; if he thinks he needs to go he’s happy to hang out on the potty. I think we’re back in the game.

So today’s take-home: Some babies do EC better with nappy backup than nappy free. At least for now. And on we go with our fascinating, if sometimes challenging, EC journey. 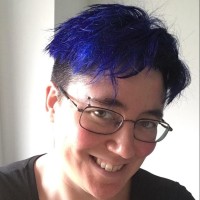 About The Author: Juliet Kemp

Juliet Kemp lives in London, UK, and blogs at Twisting Vines. She is thoroughly enjoying her attachment parenting journey.

Calling for Submissions for the July 2013 Carnival of Natural Parenting: Learning About Diversity

One Response to The Nappy-Free Potty Pause